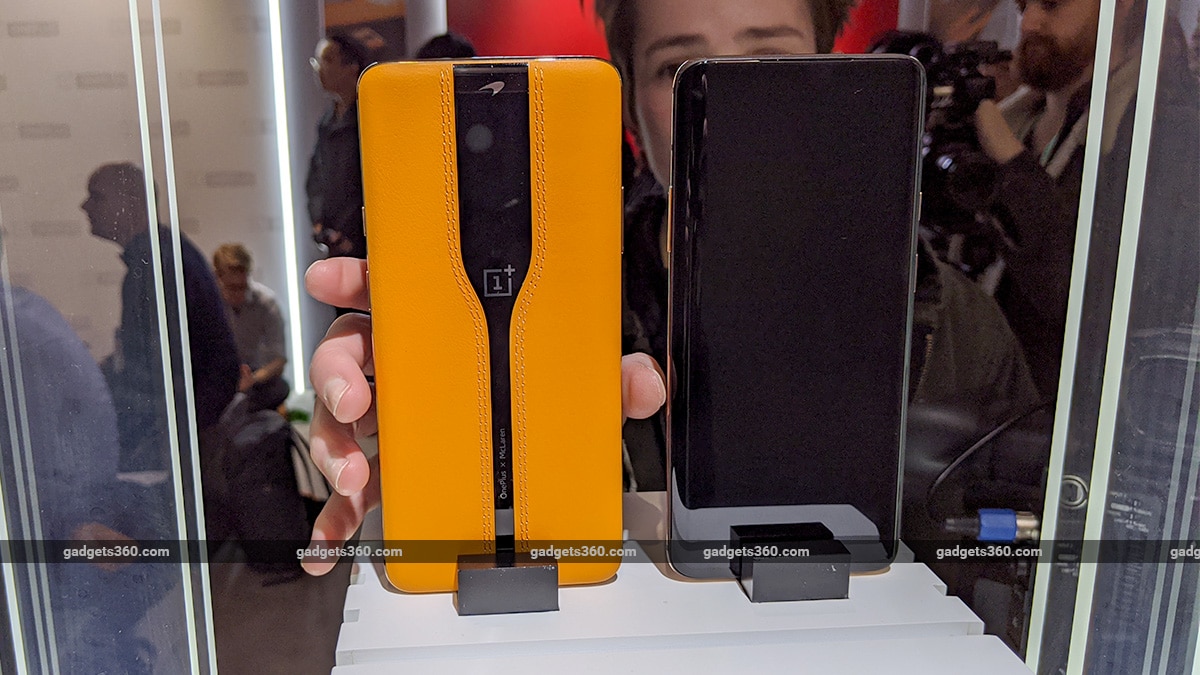 After a bit of teasing, OnePlus has officially unveiled its Concept One smartphone at CES 2020. The phone has been developed in collaboration with McLaren and is the first smartphone to feature an electrochromic glass panel, which can turn transparent or opaque to reveal or hide the rear cameras. OnePlus claims that it takes just 0.7 seconds to transition from solid black to fully clear, which is quicker than the camera itself takes to fully activate.

This was inspired by McLaren’s 720S Spider sports car, which features a retractable hard-top with the same kind of electrochromic material that can be switched between tinted and transparent states. The phone also features a leather panel on the back, in McLaren’s signature Papaya Orange shade. OnePlus hasn’t revealed any details about specifications or when/if it plans to launch this device anytime soon.

This isn’t the first time that OnePlus has experimented with different textures and materials on its phones. We’ve seen finishes such as bamboo, wood, Kevlar, Alcantara, frosted glass, and ceramic on OnePlus phones in the past. The Concept One’s special glass only covers the camera section, while the rest is covered by leather, with exposed stitching. This glass contains organic particles which react to current, to shift to the desired state. Besides this party trick, it also serves a practical purpose as the glass is said to double up as a polarising filter for the cameras when shooting under very harsh light. This is implemented in the camera app in pro mode, and allows for a lower ISO and longer shutter.

OnePlus claims what is used on the Concept One is the most advanced electrochromic glass ever made. Two glass panels sandwich the organic material between them and measure just 0.1mm each, for a combined thickness of just 0.35mm. OnePlus also claims that this glass panel uses “almost” no power to operate. OnePlus partnered with McLaren on the design of the Concept One.

The frame of the phone is made of an aluminium alloy treated with a new vapour deposition process so that the thin gold finish layer can be deposited precisely, resulting in what the company calls a subtle shine.

“This concept phone is a significant experiment into the future form of smartphones. OnePlus started this initiative with the goal of bringing the “burdenless” user experience to the next level. The invisible camera stands as a new form of camera design, one that spares the user from the compromises of current camera layouts,” said Pete Lau, CEO and Founder of OnePlus, speaking about the OnePlus Concept One phone.

OnePlus is also very proud of showcasing its R&D efforts, saying that this now accounts for over 70 percent of the company’s staff. There are seven OnePlus R&D centres around the world, including one recently launched in Hyderabad which already has over 200 people working on software for 5G.

Vu Premium 4K LED Android TV Review
Huawei’s Upcoming Smart TV to Be a 65-Inch OLED Behemoth With 14 Under Display Speakers: Report
Amazon Said to Be in Contact With Coronavirus Test Makers as It Plans Pandemic Response
How One Silicon Valley Factory Keeps Running in the Age of Coronavirus
Zoom Meeting IDs Can Be Guessed by This Automated Tool; Company Removes Feature Displaying LinkedIn Data