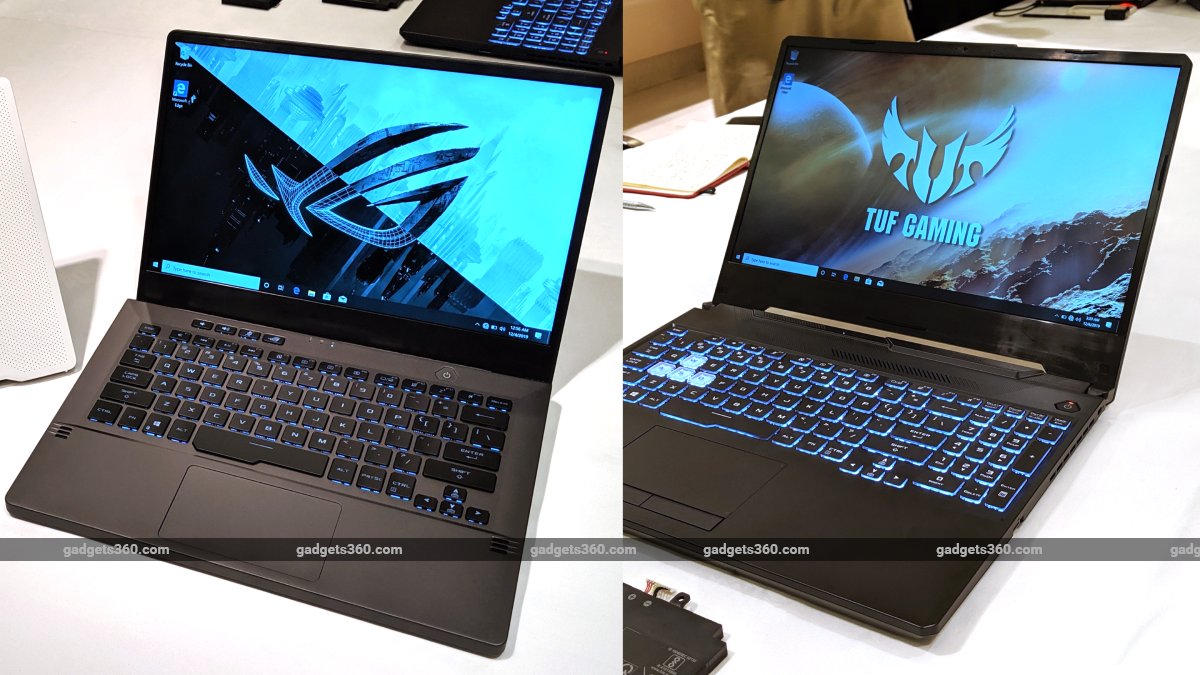 Asus’ Republic of Gamers (ROG) division has unveiled a bunch of new gaming laptops and desktops at CES 2020, and there are quite a few standout designs and ideas that the company is showcasing. These gaming-centric PCs emphasise looks and of course there’s plenty of gamer-grade bling, but the company promises that a lot of thought has gone into each new product, and that they represent how the gaming market and laptops in general are shifting.

Gadgets 360 was able to spend some time with pre-production units of two of these devices, the ROG Zephyrus G14 and the TUF Gaming A15 prior to CES 2020. Here’s everything you want to know about the products as well as Asus’ strategy.

The highlight of course is the brand new ROG Zephyrus G14, a compact gaming laptop with a completely unique ‘AniMe’ LED light show on the lid, for those who just can’t resist showing off. This feature will be optional, and we were not able to see it in action on our prototype. However, we do have a good idea of how it will work. First though, there’s the device itself.

Asus is simplifying its naming scheme, so the ROG Zephyrus G14 is the new public name for the GA401 – you’ll still see this model number used in some places though. The device is actually designed to look like a sober, professional laptop when you aren’t showing off, and it really does look like it could fit in anywhere. It doesn’t blend into the background, but it also doesn’t scream “cheesy gamer” with red lighting and aggressive accents. Even the ROG logo is relatively subtle.

All that goes out the window if you turn on the AniMe display, though. This is a grid of 1,125 tiny mini-LEDs, each individually controllable and visible through a precision-cut grille. The LEDs are white, not RGB, but you get 256 levels of brightness which opens up a whole world of animation possibilities.

Buyers will get software that lets them create animations quickly and easily by just importing a GIF file. You could also create one frame-by-frame or just type some text and choose effects. The visualisations can react to music or game events, and can show information such as notifications or the time.

Of course we asked Asus what impact this has on heat, battery life, and most importantly, cost. If you do want this feature, the unit will be 2mm thicker and very slightly heavier, and we don’t know the price difference yet. Company representatives did admit that running something very heavy will hurt battery life, but said there are some precautions such as not being able to have all the LEDs on constantly at full brightness. We also asked whether there’ll be third-party integrations or a way to develop and share animation profiles, which the company did not want to comment on.

The other big bit of news here is that Asus has gone with the just-announced 4th Gen AMD Ryzen mobile APU but has taken that a step further by customising it to run at a 35W TDP rather than the standard 45W. Asus told us that this version of the new Ryzen APUs will be exclusive to Asus products for some time, and that it was developed by the two companies in partnership especially for the slim Zephyrus G14. 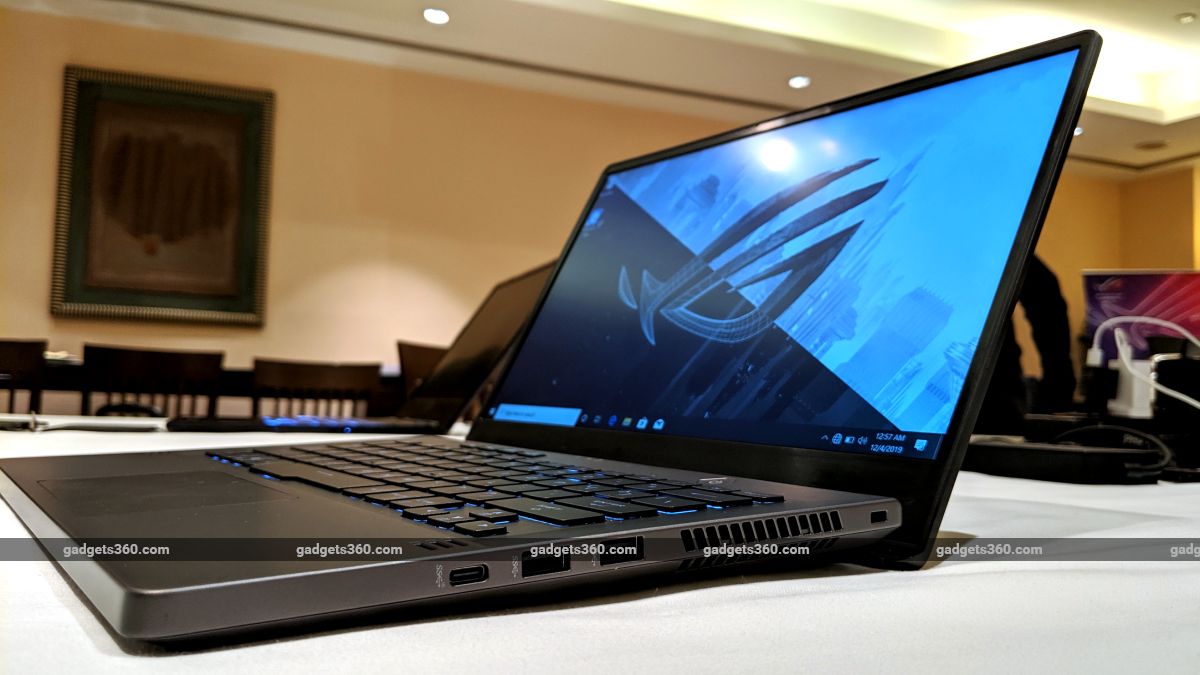 We don’t have much detail about the CPU yet, but it’s a 7nm part based on the Zen 2 architecture with up to eight cores and 16 threads. Asus says this is more than enough not only for gaming but also for professional workloads, and in fact the company expects this model to have wide appeal beyond the usual gaming market.

We also don’t know what the exact configuration options will be when the ROG Zephyrus G14 comes to India, but device can handle up to an Nvidia GeForce RTX 2060 GPU, 32GB of DDR4 RAM, and a 1TB PCIe 4.0 NVMe SSD. There will be display options too – you could choose a 1920×1080 120Hz panel aimed at gamers or a 2560×1440 60Hz option more geared to content creation. Both are Pantone certified and support AMD FreeSync (which does work with the discrete Nvidia GPU).

The battery can be charged using the bundled 180W adapter or a 65W USB Type-C charger for convenience on the go. There’s also Wi-Fi 6, Bluetooth 5, and four speakers, but no webcam. One neat feature is the power button with integrated fingerprint sensor. You only need to touch it once when powering on the system, and it can cache your fingerprint and automatically feed it to Windows a few seconds later. 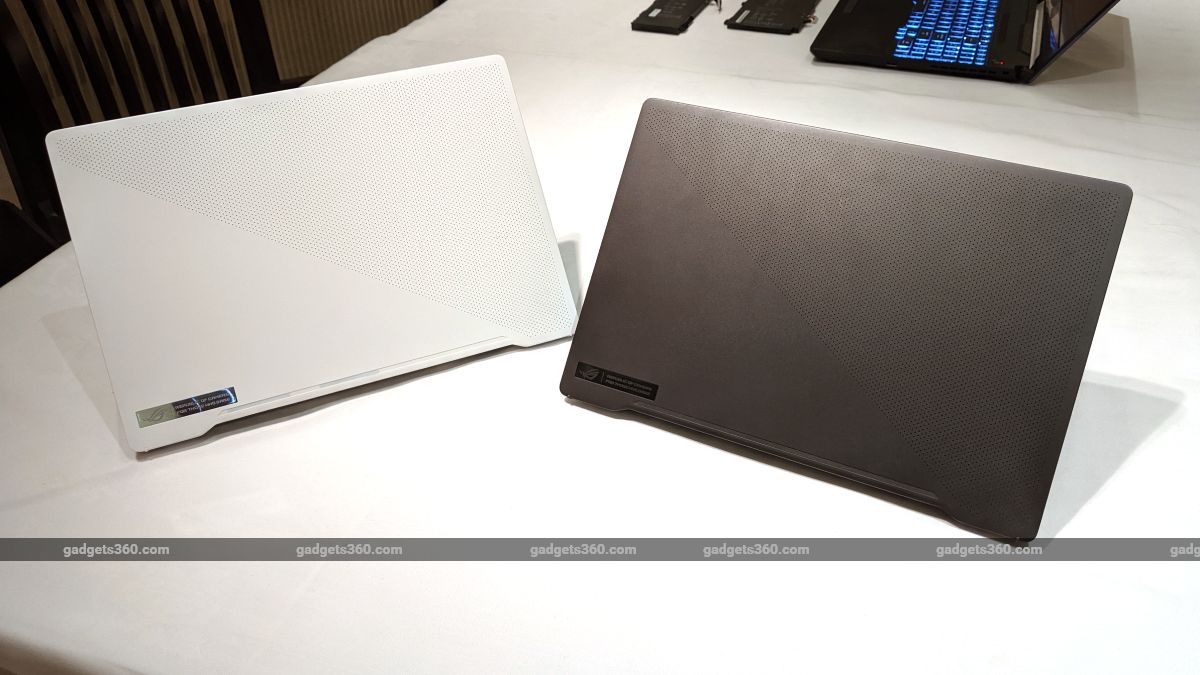 The ROG Zephyrus G14 will be available in black or white. Seen here without the AniMe display.

Cooling is critical for a laptop this small, so Asus says it can dynamically manage CPU and GPU temperatures, allowing one to trade off in favour of the other. There’s also an ErgoLift hinge that improves airflow, special slim fans designed to minimise noise, and a precision air channel design.

The ROG Zephyrus G14 will weigh just 1.6kg and the version without the AniMe array will be 179mm thin which means the version with it will still be a hair under 200mm. Asus also promises a comfortable keyboard with 1.7mm key travel in this tiny chassis, plus there are full-sized USB Type-A and HDMI ports on the sides.

The second model we spent some time with was the new TUF series A15, aka the TUF FX506 which will succeed the current FX505 model. This model will also feature AMD’s 4th Gen Ryzen Mobile processors, but an equivalent TUF F15 model launching later this year will feature 10th Gen Intel Core CPUs. There will be A17 and F17 models in addition with larger screens. This series is aimed at entry-level gamers who still want features and flexibility.

Asus will also have options in terms of style – there’s the understated Fortress Grey option with a simple textured finish, or the more aggressive Bonfire Black with its more gamer-like lines and accents. Both however have a large, prominent TUF logo in the centre of the lid. Asus might decide to offer different sets of specifications for the two versions. 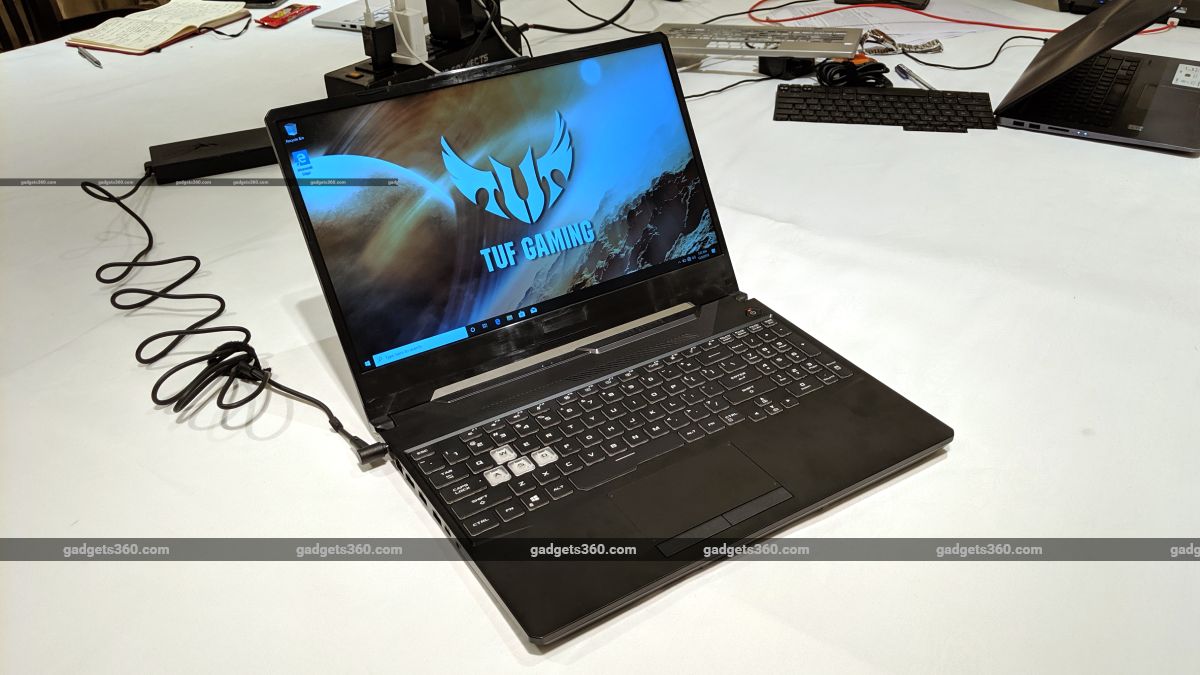 In terms of design there’s a new cooling system with self-cleaning air channels and fans. One feature we really liked was the easy access to hardware, which in this case is two SO-DIMM RAM slots, two M.2 slots for SSDs, and also a 2.5mm drive bay. Asus is proud of its keyboard which has a roomy layout including well-sized and spaced arrow keys as well as a full number pad. The keyboard has RGB backlighting, but in a single zone. The trackpad also has separated physical buttons, in response to user feedback.

In terms of specifications we have up to 8 cores and 16 threads on the unnamed 4th Gen Ryzen Mobile processor, and up to a GeForce RTX 2060 GPU. You can get up to a 144Hz display on the 15.6-inch model and up to 120Hz on the 17.3-inch version, both of which support FreeSync. The display has slim borders but there’s a slight bump at the top of this model for a webcam.

SSD, HDD, and RAM amounts will vary by country and variant, but Asus is also considering offering two different battery capacities. There could be a standard 48Wh battery, like the current model, as well as a larger 90Wh option – the larger one would mean sacrificing the 2.5-inch drive bay, but two SSD slots should be plenty.

Asus has not yet decided whether it will match the two different lid finishes with the two different battery types, and aim them at different audiences. It also isn’t clear how many variants the company will end up with, considering the number of potential combinations of lid, battery, CPU, GPU, screen, RAM, and storage capacity/type. This could become confusing in the market. We’ll have more information when the TUF Gaming A15 and its siblings are launched in India in a few months’ time.

We don’t know the prices of either model yet, but buyers in India can expect the ROG Zephyrus G14 as well as the TUF Gaming A15 and A17 to come here in the first half of 2020. Asus will also be bringing in new ROG Strix gaming desktops, a refreshed ROG Zephyrus 15 laptop, and many more peripherals and accessories. Do stay tuned to Gadgets 360 for more news, Indian pricing, and full reviews over the course of 2020.

Disclosure: Asus sponsored the correspondent’s flights to New Delhi for the pre-CES briefing

Huawei’s Upcoming Smart TV to Be a 65-Inch OLED Behemoth With 14 Under Display Speakers: Report
Roscosmos Says US President Donald Trump Paving Way to Seize Other Planets
Lenovo and Motorola Extend Global Warranty on Devices to May 31
How to Fix a Slow or Unstable Wi-Fi Connection
Germany Enlists Fitbit Wearables and Smartwatches in Coronavirus